I used to believe that sports are not really my thing. But at some point, I decided to become a person who works out every day. And I have. 💪
Which is the proof that we can be any type of person we choose to be.

But here’s the thing, it doesn’t come easily to me. 😰
My coordination sucks, my movements are slow, and it takes me way longer than everyone else to learn new motor skills. The struggle is real. 🤷🏻‍

But you know what? It’s worth it at so many levels.
E.g., I was able to re-learn how to do a wheel pose & a wall handstand. Things I wasn’t able to do since being a kid. 🙊

So I decided to try more difficult yoga poses.
Like a crow pose. I first attempted it over 2 years ago & failed. But most people need a couple of months to master it, so I kept trying. 🤷‍♀️
And I failed over & over again.

A year later, I wasn’t anywhere close to lifting my feet.
I tried every hint: books under my feet, a landing pad with cushions in front of my face, baby crow, training my arms & core muscles… but I wasn’t making any freaking progress. 😕

Two years later, I still wasn’t able to do it.
My body was strong enough, but my mind was too scared of falling forward. And it was the hardest thing to work on. 🙈😱
But I kept trying.

And at some point, I was just so frustrated that I told myself: “Oh, come on! Stop this pity party & just freaking do it!” And I did. I couldn’t even believe it.
I was able to hold it just for a few short seconds obviously, but that was it. 💪

Now, a few weeks later, I’m holding it longer & longer.
And I’ll be honest here, I don’t do it all correctly, it looks far from pic-perfect, it’s still a work in progress. 🙈
But being able to hold it is a great confidence boost, good fun, and it looks badass! 🤘

But that’s not the end. I’m taking a new challenge:
I’m learning to do splits. 🤸🏻‍♀️

I’ve never done it before. It may take me awhile – I’ll keep you posted. I’m pretty far from where I want to be (see the pic), but that’s okay.

And I INVITE YOU to pick a pose & try it with me!

It doesn’t have to be super difficult. Maybe something you always wanted to try. Just pick something you’re not able to do yet.
Start slowly, play it safe, listen to your body, never force it, and just be playful. You’ve got this! 🧘🏻‍♀️

What pose are you going to work on? 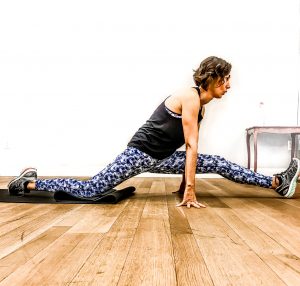